Some thoughts on presentations

I am currently following lectures on different topics about fusion engineering by some of the most renowned specialists of their field. But I must admit something: on average, the lectures are bad. There are all powerpoint-based courses: the slides serve both as support for the oral contribution and for the lecture notes. As a result, there are overloaded, the speaker try to detail everything and after a few minutes, a large part of the audience has gone back to their computing activities. In my opinion, there should really be two parts to a lecture: the written notes, with a detailed explanation of the content of the course and the oral part where the lecturer stresses the most important parts; his purpose during the talk should be to make the audience feel and understand the major issues at stake, leaving the details for a later reading of the notes.

It is a bad effect of powerpoint and of the cumulation of the presentations by the lecturers. I do not know how many presentations they have in a year, but I would say more than 10. In these conditions, it is easier just to adapt the slides from one presentation to the other and not to prepare lecture notes.

I thing this has to be improved because it can ruin the motivation of students when a subject is badly addressed.

1951. The train is rushing through the vast plains of USSR. The discussion is heating up between two passengers debating the idea of Oleg Lavrentyev on the possibility of achieving controlled thermonuclear fusion. A new idea is emerging from the minds of the two protagonists: a toroidal magnetic field to confine the particles. Several months several articles are published, celebrating the birth of the concept of TOKAMAK (тороидальная камера с магнитнымикатушками). The two authors are Igor Tamm and Andrei Sakharov. 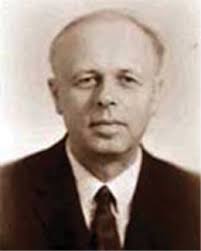 The story of the train is probably a legend, the articles not. It is sometimes amusing to imagine the moment when life-changing ideas like the tokamak were created in the mind of people.

I am staying two weeks in Padua for lectures on different topics on Nuclear Fusion Engineering and Physics. This is the opportunity to give a short overview on very interesting subjects. But before starting, a few words on the environment.

We are at the university of Padua, one of the oldest universities in the world, since it was founded in 1222. The weather is nice, students everywhere in the city (almost 60000 I heard). So a very beautiful and inspiring environment for work.

We will start this series of  posts with the issue of  materials for fusion reactors. Actually this question does not concern ITER because the flux of neutrons produced will be quite low. It will be a major problem for DEMO (a concept of demonstrator of reactors) and for the operational reactors. This subject faces the “dark” side of nuclear fusion, the one would could endanger the green advantage of fusion, if not properly treated. Consequently, a huge effort is put on the development of new materials with a better behaviour in presence of irradiation.

The main problems are the neutron generated by the principal reaction: Deuterium+Tritium->Alpha+Neutron. The neutron carries the major part of the released energy: 14.1 MeV. The neutrons are not affected by the magnetic fields, therefore they have straight trajectories finishing in the walls surrounding the plasma. There are two parts in the tokamak which have to deal with these neutrons: the blanket, on the walls and the divertor, at the bottom of the tokamak. The blanket has top stop the neutrons and to extract their energy through collisions with atoms and to use the reaction of neutrons with lithium to produce tritium which is reinjected as fuel. The divertor extracts the helium ashes to maintain the purity of the plasma.

The energy of 14.1 MeV is not easy to handle and is far beyond the knowledge acquired on fission reactors. To develop materials which are capable to deal with these neutrons, it is necessary to understand the interaction of these particles with the matter. A microscopic approach is required. The qualitative effects of irradiation are quite well understood but only quantitative  models make it possible the design of new materials.

– mechanical effects: swelling, hardening and increase of the ductile to the brittle transition temperature

– electrical effects: change of conductivity in insulators and degradation of critical current in supraconductors

– production of radiotoxicity and heat deposition

Consequently a lot of effort is put on the understanding of radiation defects generation: the type of defect produced, how the defect propagates in the material, one interesting are the dislocation and how they lead to swelling.

The response of the material depends on its type: ferritic-martensitic, ferritic steels, ODS steels…

In our series of posts on the virtual visit of existing tokamaks (GOLEM, ISTTOK), we attack today a big candidate: the korean tokamak KSTAR. Indeed, the IAEA conference on Fusion Energy takes place in Daejon (there are a lot of live tweeting about this) and it is a good opportunity to talk about this major player in nuclear fusion. You can access here the official website of the project KSTAR . It is one of the latest and most modern tokamaks. I attended the SOFT conference in Rostock in 2008 where the team made the announcement of the first plasma;  it was very moving.

One of its main features are the supraconducting magnetic coils. Consequently, it offers the possibility to study the steady-state operation of a tokamak (with classical magnets, only a transient phase is possible before excessive heating).  In size, it has the same order of magnitude as ASDEX-Upgrade or DIII-D.

It has three types of auxiliary heating: NBI, ICRH and lower hybrid. The ECRH is still in discussion.

It is not original to say that, but this team is very impressive in the way they work: at the last SOFT, they presented a long of results of high quality. I am especially impressed by the quality of the documentation: each detail of the construction of the machine made the object of a precise article. It is not so common for engineering topics to have such a rate of publication. I think that we have a lot to learn.

I have few contact with these people. We received two years ago three guests from the NFRI and had the opportunity to exchange a few words only during the summer party of our group. They are serious but my lack of experience with them makes it difficult to make a judgement on them. It would be anyway a pleasure in the future to develop more cooperation with them.

Here we are! The Big Picture has release fantastic shoots from the National Ignition Facility. I do not know how they can achieve such a quality of picture and what makes them so effective. But they make the point: science are not only results, they are also engineering, art: highlighting these wonderful facilities like the NIF or the LHC ist part of the joy of making science. And I think a lot of scientists should make an effort to improve the photos they make from their devices.  For instance, look at this picture from ASDEX-Upgrade:

Does it make you dream? Personally, I do not. But even for small experiments, it would be better to have high-quality shootings. It is not only a question of promotion but also to make people dream.

Some thoughts on the SOFT 2010

It was a big conference: more than 1000 participants, with a big involvment alsor from the industry. The main topic was of course ITER, but there were also a lot of results concerning other facilities: W7X, KSTAR, EAST, RFX…

It was also the first talk of Pr. Motojima, the new ITER director, in front of a big part of the fusion community. My feeling was that he had difficulties in the presentation: whether it comes from difficulties in english or from an incomplete knowledge of the topic, it has to say. Some colleagues of mine suggested it was due to his lack of belief in the project. However, he also looks like how to manage things and doesn’t lack of a certain sense of humour. Therefore he is certainly the right man to improve the management of ITER, but the fact that his talk was not very inspiring is disturbing, at least for me, a basic scientist on the project. A lot of theories on project management insures that a project leader does not need to be charismatic. Yet, I like to dream, my colleagues like to dream. The development of ITER should be a balance of dream and hard-nosed management.  Clearly, one part is missing: showing the construction of buildings and the digging of holes for the basement are of course a sign of how things progress but not an inspiring goal.

On the topic of management was also a very interesting talk from Pr. Wagner on the creation of the Large Scale Infrastructure Network: the main idea is that more and more facilities require a complex management and it is high time to establish common reference in methods to develop these infrastructures where both research and industry are involved. The LHC is a good reference of the success of such a facility (there were flaws, problems, but it works). People ask why it is not possible to adopt the same strategy on ITER. The problem is that behind the LHC is the CERN association with 50 years of experience; the structure is unified, with members sharing the same objectives. In comparison, ITER is less than 10 years old. Creating and nurturing a big entity require time. Changes are on course to improve the methods but it will certainly still have an impact on the timeline.

I do not know if ITER will be a success or not. But during this conference I felt that seeds were being sown, seeds for the future of big scale projects. We are learning, learning how to make research and industry cooperate, how to train young and older engineers and scientists, how to build a community around a common goal, how to manage a project where the technology is not mature. Even if ITER does not work, there will be a lot of spin-offs and not only in technology, but also in know-how. I think it deserves the effort accomplished.

An earth-like planet has been discovered in the habitable area of a star’s system. These are really good news and I am surprised how it can change the view of space travelling. Gliese 581g, the planet at stake, has become a potential target for a space mission in the mind of lot of space engineers. Of course, we will not start tomorrow with the development of a spaceship to reach it. But psychologically, something has changed: there is perhaps something there, something perhaps very precious, there is perhaps life. A lot of concepts have been elaborated both in science and in science-fiction to travel between the stars. But there was in all of a them some level of abstraction: the main goal was missing. And now, you have this dream of space exploration and discovery of life in outer space and it becomes a strong support of our ability to design new spaceships. We have to wait and see how things are turning out, but if can guess that, as soon as the first strong pieces of evidence of life on another planet are detected, our colleagues of th Icarus Project will have very busy days.